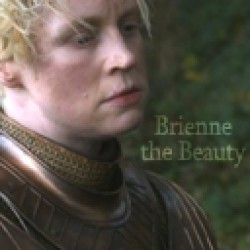 Worming my way through books since 1998

Baz has finally appeared on the scene and things have started to pick up - by which I mean that there's finally some tension in the story, and not only self-reflective teenage angst. It was really getting a bit too much for me. The prejudice-fuelled tension between Simon and Baz is lovely though - the only thing I would criticise is that they went too quickly from "you're my worst enemy and I hate your guts" to "I still don't like you, but I'll help you in any way I can". I don't think that that transition was handled well. But other than that I'm really glad for Baz's arrival in the story. It's made things a hundred times more interesting.

For a moment - not even a moment, a split second - I imagine him saying, "The truth is, I'm desperately attracted to you." And then I imagine myself spitting in his face. And then I imagine licking it off his cheek and kissing him. (Because I'm disturbed. Ask anyone.)

Hands down my favourite quote from this book so far xD! (And my favourite chapter too, but more on that later, hopefully ;)!)

I started reading this months ago, and am just now getting back into it. Honestly, I really have no clue whether I like or don't like this book so far, but here are a couple of thoughts: 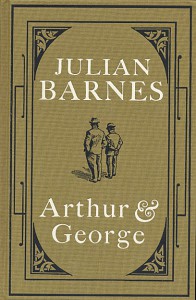 Finally reached the last hundred pages! So, what are my thoughts up until now? (I'm literally asking myself this question)

Well, the first thing that comes to mind: the pages are too damn looooooong. I know, that's a really shallow complaint to have ... but I hate it when I feel like I'm not progressing through the book at all. It takes me like an hour to read even 20 pages O_O - and that's because my edition has only 360 pages in total, whereas other editions have over 500 ... *grumbles*

Other than that though, I still think the book is brilliant. I've read comments by other people, arguing that it's a bit wordy and that it takes too long for Arthur and George to meet up, but I disagree - I think the pacing is just right and it's a joy to slowly discover how these two people's lives are going to cross. Plus, everything that happens in the meantime is really exciting - including the institutional racism and the trial against George. And now that Sir Arthur has taken up the investigation for George's sake, my eyes are basically glued to every page.

One thing I will say though is that you need your full concentration while reading in order to enjoy this book. This is a novel that's obviously meant to make you think - about racism, justice, religion, belief, public image, love and one's (chosen and dictated) purpose in life. To sum up: heavy, thought-provoking stuff wrapped in a fascinating crime story in post-Victorian England.

I really like this book so far, mostly because the characters are fascinating! It's told from two alternating points of view: from "Arthur's" and "George's". As becomes clear pretty quickly, the "Arthur" in this story is actually Sir Arthur Conan Doyle, and as a Sherlock Holmes fan it's incredibly interesting to read about the author's life and his relationship to his most famous creation (which wasn't a great one, famously).

What's truly incredible is that even with such a well-known titular partner, the "George" in this book is really quite equally interesting - I really enjoy his unique perspective on the world. It's very British, in a way xD. He's really quite proper and ordered in his appearance and dealings - and he's in love with the law ;). But he manages to be quite charming and endearing at the same time - just a sweetheart really. 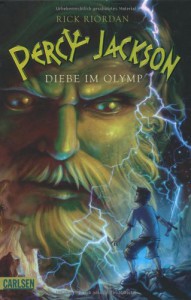 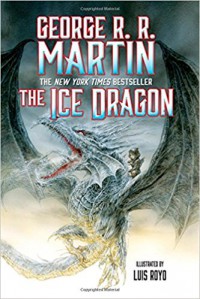 This is a lovely little book that has quite the fairy-tale-feel to it, in that the characters don't have that much of an individual personality and the setting is pretty unspecific, both time- and location-wise. It's really quite a charming little tale - I mean, it's got dragons in it, how can it NOT be?!

Still though, it's very different from the A Song of Ice and Fire novels, and even though it's apparently supposed to be set in Westeros, I could basically see this taking place anywhere (... By which I mean "in any fantasy world"). As part of the fairy tale genre, this is an excellent read, however :-)! 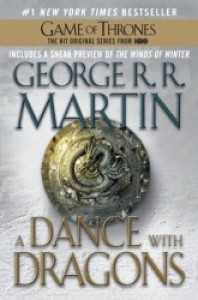 So, at the end of this book, what are my thoughts?

1) THE CHAPTERS: I enjoyed Jon's chapters massively (.. except for ONE MASSIVE DOWNER). I thought his continued struggle concerning his code of honour as the Lord Commander and his desire to help his family was really well portrayed. And there really was a lot of exciting stuff going on at the wall besides. I really liked Tormund - his exchanges with Jon were brilliant to read. And Val was fantastic too, for that matter :).

I wasn't too keen on Tyrion's chapters in the beginning, to be honest. They were very slow and Tyrion was in a really depressed and "fuck the world" kind of mood - understandably so, of course, but that doesn't make it any more fun to read. Towards the end his chapters really picked up pace, however, and I really loved the addition of Penny as his sidekick. She's a really sweet girl and it's interesting to find out how other "dwarves" actually live their lives in this world.

The real kickass chapters were Reek's/Theon's though. I won't lie, they ARE difficult to read and you shouldn't spend too much time picturing Ramsay's torture methods ... but, again, Theon's struggle between his old and new identity was beautiful to read - especially once Jeyne Poole arrived and he was clearly torn between his fear of Ramsay and his desire to help the poor girl. I'm really curious to find out what'll happen to him in the next book, now that he's arrived in Stannis' camp. Assuming that Stannis is alive ...

2) LENGTH: I have to admit, even though I enjoyed this book a lot ... it did feel a bit stretched out, sometimes. Dany's chapters, for instance - sometimes there didn't seem to be much going on at all. And I wasn't a big fan of Victarion's or Quentyn's chapters - even though especially the latter was a lovely contrast to Dany's storyline with the dragons, I suppose. I don't know, I think I just feel like this whole upcoming battle in Slaver's Bay is one battle too many? I think that Dany should really be making for Westeros already, if she's ever going to arrive there - she's been staying in Essos for too long. And especially now that there seems to be another contender for the Iron Throne of Targaryen blood ... (By the way, even though I enjoyed reading the Young Griff chapters ... on another level, his appearance bugs me. It feels a bit deus ex machina to me. But who knows - given that things never turn out as one thinks they will, I wouldn't bet too much money on Aegon actually sitting the Iron Throne ... but that's just my opinion.)

All in all I enjoyed this book massively, however, and I'm glad that I only read it now, when it seems like the publication of Winds of Winter isn't too far off ... fingers crossed ;)!

"He thought of Arya, her hair as tangled as a bird's nest."

'I think we had best change the plan,' Jon Snow said.

- A Dance with Dragons, Jon XIII

YES! YES! YES! :) Even though I know he's not going to find the real Arya ... but yes, he finally decides to go and help his family! This moment is so emotional, it's really epic to read!

Last 60 pages people! Nearly done! Only one more Jon, Barristan and Daenerys chapter left - and the epilogue of course! Excited!!! Especially since at least two of these chapters should hopefully blow my mind ;-)! Yay for Dany and Jon!

What else has been happening though? As I thought/hoped I got to know more about Theon through Asha's POV chapter - and it was glorious! Thank God he's free - him and Jeyne both! I'm excited for what's in store for them in the next book!

I also really enjoyed reading about Tyrion - I feel like he finally has got his groove back and he's ready for some smart little scheming and intriguing! I'm really excited how he's going to turn the second sons back to Daenerys' side in the next book. I'm sure it'll be epic! Plus, I'm actually really excited to see what will happen to Penny. She's one of those minor characters which I really grew to love throughout this book and I love how protective Tyrion is of her. They've got a sweet friendship I think - even if it's slightly imbalanced in that Tyrion is obviously in charge. But Penny is actually very persuasive in her own way - I don't think that many people could have persuaded Tyrion to ride a pig ...